Njombe region constitutes to a cluster of the most food insecure regions in Tanzania with increasing cases of malnutrition regardless of the fact that it is one amongst the regions considered as “food basket regions” in Tanzania.

The corporate impunity which has destroyed fate of the majority who are engaged in production activities around the world also has played a great role in re-directing the agricultural practices and culture in Njombe and other production potential regions of Tanzania. It is a common fallacy around those regions that one can’t produce without the use of massive industrial chemicals and fertilizers and that if an individual farmer subscribes him/herself into the mechanism he/she is sure of escaping the existing poverty in their setting.

MVIWATA networks in Njombe and Ludewa districts in Njombe region on the other hand have embarked in an alternative journey of learning, practicing and implementing activities to ensure that they produce safe food, protect environment, health and local knowledge of producing food. To them with this learning journey, Production is looked as not only a means of earning money and escape poverty but as an important aspect of one’s culture and rights (socially, politically, environmentally, culturally and economically).

“Agroecology farming practices promoted by MVIWATA has imparted to us a spirit in recognizing and use locally available resources for production while valuing land and producer and consumers’ health. The system has instilled positive mentality towards our own farming practices where currently we’ve established demonstrations for vegetable gardens and we hope to advance the practices into more hectares of land and add more crops other than vegetables gradually” – Onolina Mwinami, Amani group.

Up to August 2022, five (5) demonstration plots have been set in five (5) villages of Njombe and Ludewa districts from which more than 175 (109 women, 66 men) smallholder farmers from five (5) villages of Mavala, Mapogolo and Lupanga in Ludewa and Ibumila and Itunduma in Njombe have learnt directly on agroecological practices such as production and use of organic and compost manure, production and use of bio pesticides and mixed cropping system. From the demo plots farmers have produced Amaranths, Chinese, Swiss chard, Carrot and Cabbage and have been charged with the responsibility of training other farmers.

“The initiative has opened our minds to know that our local community is blessed with resources that can be used for farming including farmyard manure, composite manure, residues and medicinal plants to mention a few. Utilization of the available resources in farming can enable us to optimize the cost of production, conserve our environment and get rid of diseases which are caused by excessive use of industrial fertilizers.”

The demo plots have given farmers an opportunity of producing crops that in the current setting are considered as “need-chemical fertilizer” crops. Alternatively farmers have embarked on a program on organic and green soil fertilization through which humps of organic manure are produced in bulk at a village level and used in the demonstration plots. In other spaces the vegetables have been integrated in community tree farms where until June 3.6 Hectares of land in Njombe and Ludewa have been turned into agroforestry farms through this approach.

Another great part of this ongoing initiative is the fact that farmers in the areas engage in actions of protecting the environment where degraded, dead lands, deforested and catchment areas are being identified by MVIWATA members in the networks and efforts for restoration put together, actions that have successfully managed to restore the once called dead lands and set an example for community actions in environmental conservation in both Njombe and Ludewa Districts.

The process has also been possible through a series of trainings on climate change and tree nursery establishment from which farmers through groups and networks collect indigenous tree seeds notably Miombo and Mipogolo which are in a danger of disappearing and other tree seeds and produce tree seedlings. Until August 2022; 111,187 tree seedlings of Pines, Eucalyptus, Cypress, Avocado, Peas, Coffee, Mipogolo and Miombo have been produced by farmers through 42 tree nurseries established by networks and groups.  Through this initiative, 52.8 Hectares of Land have been restored and farmers in the areas have moved from the common idea of planting trees for business to planting trees for environmental protection. 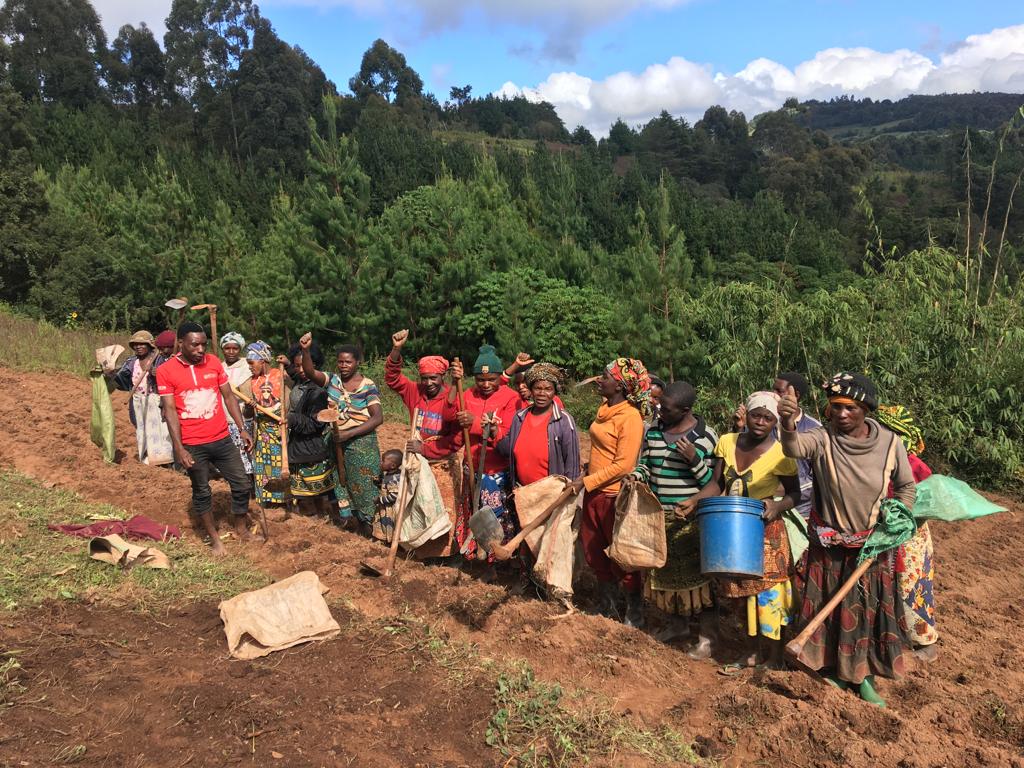